Huangshan 2s is the first wearable AI processor that employs a dual-core RISC-V instruction set architecture. The company is excited to have developed a wearable chip that so well balances function, performance and power consumption. It will continue to be a significant differentiator in performance that consumers will experience from the company's smart health products.

Zepp OS is not only a smart watch operating system but also the core of an open health management platform. To avoid the limitations and problems of many other mobile operating systems, Zepp Health developed a completely different and lightweight Mini Program + Cloud concept for its smart wearable Zepp OS. The company's operating system is also designed with an emphasis on health, user experience, and privacy protection with three key characteristics: being light, smooth and practical.

At 55MB, the new Zepp OS is one-tenth the size of the company's previous Amazfit OS and it is one twenty-eighth the size of Apple WatchOS 8. Operating power consumption of Zepp OS is 65% lower than the previous Amazfit OS while one comparison test generated a 190% increase in endurance in one of the company's smartwatches. The new Zepp OS also includes many streamlined dynamic visual effects to maximize the user experience.

What may be the most exciting for Zepp and Amazfit users is that the company is opening the Mini Program framework for developers to create new apps that leverage the high-quality data and intelligence from the company's proprietary biosensor array and AI chip.

Zepp OS supports 4G/5G modules and integrates TCP/IP network protocols to allow the smartwatch to be connected directly to the cloud without a smart phone.

The Zepp OS will be officially launched in Q4 2021 and it will become an open health management platform that will allow thousands of developers to participate and to create a global open health ecosystem for smart wearable users.

"We envision the Zepp OS to be an OS comprised of thousands of developers with tens of thousands of mini smart watch applications that form an ecosystem to help our users to better manage their health and enjoy better lives. The difficulty of developing such a comprehensive smart watch OS focused on health management from the ground up is definitely as difficult as developing a new chip," said Chief Executive Officer Wang Huang.

Based on five years of technical research and employing the company's proprietary Huangshan AI chip and biosensor array, the Zepp Health PumpBeats™ algorithm is able to measure blood pressure through the watch's optical sensors. Clinical testing of hypertensive patients at the First Hospital of Peking University found deviations in PumpBeats measurements of less than 5.14mmHg in Systolic and less than 4.88mmHg in Diastolic pressure.

Blood pressure measurement takes only 30 seconds and PumpBeats is expected to be available in Amazfit products in Q4 2021. Additionally, continuous blood pressure monitoring is under development. 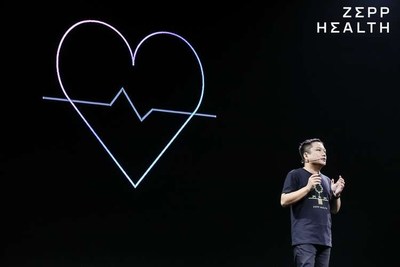 The company's mission to connect health with technology is not limited to consumers. The company has a vision for a broader health and wellness system that engages consumers and the traditional healthcare system. In 2020, Zepp Health recognized that its miniaturization, AI, chip, sensor, and algorithm engineering expertise could be leveraged for new disruptive medical imaging technologies coming to the market. The company created partnerships and made significant financial investments in several new, pioneering medical imaging companies, including Promaxo, Inc. and Hyperfine Inc. These new miniaturized and portable MRI, X-Ray and ultrasound systems are going to disrupt the location, application, and costs of medical imaging, which will have significant impact on improved care and lower costs globally.

At today's conference, Zepp Health announced an additional engineering development effort by the company in China to supplement those efforts. Research will go into unique needs of the China market, as well as to begin to explore how the company's engineering and IP can complement and add value to these budding new technologies. It is anticipated that the medical imaging data generated from low-cost advanced portable diagnostic imaging, combined with continuous health data from smart wearables, will advance the ability to detect potential health problems at earlier stages.

Zepp Health changed its name from Huami Corp. (HMI) on February 25, 2021 to emphasize its health focus with a name that resonates across languages and cultures globally. The company's mission continues to be connecting health with technology. Since its inception in 2013, Zepp Health has developed a platform of proprietary technology including AI chips, biometric sensors, and data algorithms, which drive a broadening line of smart health devices for consumers, data analytics services for population health, and industrial medical technology for diagnostics and care delivery. Zepp Health is one of the largest global developers of smart wearable health and consumer fitness devices, shipping 46 million units in 2020, including 33 million smart watches. Zepp Health Corp. is based in Hefei, China, with U.S. operations, Zepp Health USA, based in Cupertino, Calif.